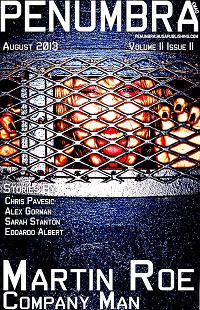 This issue’s theme is “Revolution.”

Coretta, the protagonist of Chris Pavesic’s “The World in Front of Me” is about to turn eighteen. Tradition demands that on their eighteenth birthdays, townspeople surrender their souls to a bat-winged Protector as payment for lifelong safety and security. Those who refuse have their psychically connected effigies thrown into the fire and suffer in the flesh the effigy’s fate in the flames. Coretta decides to keep her soul, alienating her friends and family who are angry that she would choose to die rather than share a coddled existence with them. On her birthday, when she is called before the Protector in a public ceremony, Coretta acts on her decision. This story had more of a feel of rebellion than revolution. The resolution came too easily and did not take into consideration the immediate reactions to Coretta.

In “Sweet Home” by Alex Gorman, aliens have taken over the world. Perversely, they are fond of dressing their slug-like shapes in human clothes and enjoying tea parties. These aliens are the worst kind of Evil Overlords, or the best depending on your perspective. Without a thought they kill the human servants for the slightest mistake. The tea obsession extends to dressing serving staff in maid outfits—regardless of the staff’s actual gender. During one tea party, human music cuts through the alien musical ambience. The narrator recognizes the song, and reflects on how it was his sister’s favorite. They were captured together. He indulges in a brief fantasy about the music heralding her return as a freedom fighter and imagines his part in the revolution. This story felt like an excerpt of a longer work.

Martin Rose gives us a “Company Man,” V. Hammer. The V. stands for Vladimir, or perhaps Victor—the protagonist can’t remember. In this era’s history, people were born to departments. Some worked their way up the ladder by fighting in the Promotion Rings. “The Powers” have removed most doors in the buildings, keeping the residents captive. Sometimes food appears for them; sometimes it doesn’t. V. Hammer remembers how quickly the ITT Insurgency in which he participated was put down. After their department receives no food for several days, a Messenger comes for V. Hammer and a colleague, T. Locke. The two men are taken to the Regional Manager, I. Kirch. There they are forced to fight a death match—the winner of which will have continued employment. These are gritty times and the opportunities for rebellion are rare. The way that V. Hammer reflects on his own actions makes this story feel hopeful.

“Chrysanthemum” by Sarah Stanton presents a logical conclusion based on China’s One Child Policy. The story considers the consequences of having too many males and not enough females. In this alternate Chinese future, female robot sex workers are available to the male masses that must redeem ration coupons to use the sexbots. Human women are commodities reserved for the upper classes. With the exception of a few minutes between clients, and a daily three hours that are dedicated to “maintenance,” the robots service men. When a man inadvertently leaves behind a copy of Li Yu’s 1657 erotic fable, The Carnal Prayer Mat, it foments ideas of revolution in the robot, Chrysanthemum, after she reads it. Her reaction to the tome makes clear that both her emotions and her political awareness have outgrown her programming. This is another story that felt like it should have been longer—a novella at least.

If, on some Tuesday, March 23, your cat tells you that you are “an insufferable bore,” pay attention. This is an important takeaway from Edoardo Albert’s “When Animals Spoke.” As quickly as it happens, humanity has to come to grips with the paradigm shift and negotiate terms of interaction with former pets and wild beasts. The narrator here, an unnamed ecotheologist, helps to draft the Contract of Mutual Support and Benefit or CoMSuB. Weighing in at less than a thousand words, this is a cute piece of flash fiction that takes the issue’s theme in fun, new directions.