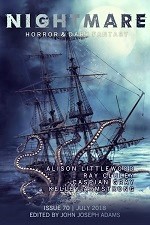 “Ways to Wake” by Alison Littlewood

July’s Issue 70 of Nightmare Magazine includes two original short horror stories. I’ve had the pleasure of reading works in previous issues of this publication, and the editor certainly did not disappoint this time around. Both stories have a wonderful literary feel to them, each consisting of a psychological horror that creeps up on you over the course of the tale.

“Ways to Wake” by Alison Littlewood

An elderly gentleman left to die in a nursing home is terrorized by a cat said to predict the death of patients. Littlewood’s story puts me immediately in mind of Edgar Allan Poe’s famous work “The Black Cat.” Throughout the piece, there are subtle hints of its influence. Its slow-building tension, threatening characters, bleak setting, and subtle psychological horror show all the hallmarks of an extraordinary tale reminiscent of the Gothic literary style.

Like Poe, Littlewood explores several themes, including the fear of death, transformation, freedom vs. confinement, and violence. For example, let’s look at the fear of death theme. While the wife of Poe’s narrator only jokes that the cat is a witch, Littlewood’s Mr. Wescombe becomes convinced of this fact. Everyone else believes the cat is a force for good, but he worries that it feeds on the souls of the sick, causing them to die. In addition, he thinks the cat is possessed by the Matron, the cruel woman in charge, and that she is using it to murder patients. Mr. Wescombe is afraid of dying and goes to extremes to prevent her from taking his life, including an attempt to kill the cat. Unfortunately, this only results in him suffering further physical abuse at the hands of the Matron.

Another example of these themes at play is in the physicality of Mr. Wescombe. Unlike Poe’s narrator, Mr. Wescombe is not a murderer telling his story from a prison cell. Instead, he’s an ailing man, withering away in a different kind of prison. Trapped in a body that’s become too frail for him to leave his room, he is at the mercy of the staff, who mistreat him because he distrusts the cat. In the end, one question springs forth: is the cat just an instrument of torture or does it truly bring a promise of freedom?

A lonely young boy named Kyle makes a new friend with an unusual talent. The tale itself is quite poignant. A number of emotions ran through my head as the young protagonist stepped out of his front door to meet an unknown fate, wanting to be forgotten by everyone. A running theme of emotional abuse and the damage it does to those who endure it was threaded throughout. In the end, Gray produced an incredible story that paints a vivid picture of the feelings of powerlessness that victims frequently suffer and of how that abuse is often internalized.

At first, I wasn’t quite sure what to think of Gray’s story. It’s fantastically written, to be sure, but I didn’t know what I was meant to feel at the end. This was not the author’s fault, however. I simply wanted things to turn out differently than they did. In short, I expected a resolution that didn’t really come. Either way, I really enjoyed it.