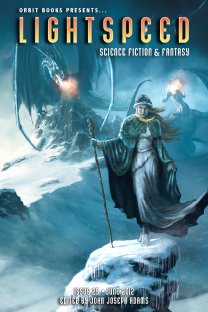 “A Plague of Zhe” by Maggie Clark
“The Cristóbal Effect” by Simon McCaffery
“Renfrew’s Course” by John Langan
“My Teacher, My Enemy” by Kelsey Ann Barrett

Lola Bennett is a robot who also happens to be a detective.  But Maggie Clark doesn’t spend a lot of time on technicalities, instead spending more time developing the kind of baggage that detectives may carry.

Bennett was not created self aware, but attained that in a more or less serendipitous way while she was in the service of a woman named Deirdre.  Coincidentally, it turns out that Deirdre is involved in her next case.  In “A Plague of Zhe” Bennett will journey to a distant planet to discover why the Zhe, a local sentient life form, are dying off.  Suspicion is cast on the small group of scientists studying them, which includes Deirdre.

I like detective stories and creating a cop with a past is one sure way to get a reader interested.  Clark does this very well and I must say that I liked this story.

Jason Blackstone isn’t his real name, just one of the aliases that he uses with his clients.   He might appear to be a time traveller, but technically isn’t one.  He uses illegal technology to travel to any one of hundreds of parallel universes where he may choose any date there as his destination.  Upon finding a universe where events are malleable (which is not always the case), Blackstone can then alter events to suit his purpose.

In “The Cristóbal Effect” events are altered.  A celebrated actor who died too young will be spared and go on to make several more films.  Blackstone will then return to his home universe/home world with prints of those films for sale to selected buyers.  Simon McCaffery has created a calculating and opportunistic character who can provide the kind of might-have-been’s that the world apparently wants.  But this makes him no less a criminal as McCaffery relates the consequences of Blackstone’s actions both for himself and for the people whose lives he changes. This is a great read which I thoroughly enjoyed.

“Renfrew’s Course” starts out in contemporary Scotland following two tourists, both gay men, as they travel along a forest trail.  The pair have been lovers for some time and one of them, Jim, experiences a flashback to their first trip along that trail years ago, followed by a number of flash forwards to several subsequent trips in the future.  We see how the relationship developed.  We also see how the relationship has been threatened by way of Jim’s affair with a woman.

The affair was over before the story even begins, but the other man, Neil, can’t completely forgive  or put it behind them.   The Renfrew indicated in the title, by the way, happens to be a legendary sorcerer which the trail happens to be named after.  He  will become important to both characters. John Langan‘s story is well written, but the character development as well as the ending gave me a few problems.  I’m afraid that this one is not my cup of tea.

The narrator of the story is a young female warrior, and as the story opens, she’s taking her first skin – the skin of the warrior she has just killed.  The narration describes the process with great reverence for the narrator’s teacher, a woman whose voice guides her in the art of becoming a warrior, and of taking a skin. The narrator takes to heart the advice of the older woman.  Simply put, by becoming a warrior and wearing the skins of the people she’d killed in battle she has become stronger and greater than anyone who can’t make a similar claim.

Let’s face it, the story kind of creeped me out, but Barrett writes well and she describes a practice which is supposed to be empowering for the victor which drives the story.  The hunt is only for the taking of the enemy’s skin and thus for his or her power.  The ending offers a resolution which no one had been seeking but which satisfies the reader.  This is a well written story.

“A Plague of Zhe” by Maggie Clark
“The Cristóbal Effect” by Simon McCaffery
“Renfrew’s Course” by John Langan
“My Teacher, My Enemy” by Kelsey Ann Barrett
Reviewed by Bob Blough

Lightspeed is an interesting online SF magazine with well-written fiction which saw its first issue exactly two years ago. It has recently combined with Fantasy Magazine under Lightspeed’s rubric.  In the June issue there are four new stories – two fantasy and two science fiction.  This month I find the SF more interesting.

In “A Plague of Zhe,” Maggie Clark has constructed a very tight story about another world, the scientists who work there, and a robot who has acquired AI status. Taking these well worn clichés she has woven a fine example of a true science fiction mystery. The Zhe are the sentient beings on their planet. It turns out they will do anything – up to and including dying – in order to help another sentient being. The Zhe are slowly dying and a robot AI detective is sent to the planet to discover the cause. The interesting intersection between the AI detective and the scientists (one of which used to own the robot before it became sentient) makes the story stand out. This is good work.

Next up is the fantasy story “My Teacher, My Enemy” by Kelsey Ann Barrett.This story takes place in a world where people gain power and energy by killing other people, skinning them and then donning their capes. There is a moral to it, but is apparent only after plodding through pages of killing and skinning. And by the time the moral is revealed it is rather anti-climactic. The story bothered me as I read it and I eventually determined it was well written line by line but was so top-heavy with violence that the minimal moral center made it a story glorifying violence rather than speaking against it, as the ending seems to want us to think. It needs more balance to be something other than just the visceral joys of murdering and skinning your opponents. Or, the author needs to go the whole way and allow it to be a horrific tale that comments on violence without the moral.

“The Cristobal Effect” is a very cleverly written story about parallel worlds by Simon McCaffery. It turns out things cannot be changed in the normal parallel worlds that can be accessed by “the device,” but only the sidereal worlds called fluid event branes (or “Wobbly B”) can be reworked in minor ways to create various futures for famous people. In this story the life that could have been for James Dean is contemplated. If you like movies and parallel world stories this is an intriguing piece.

The final story is by John Langan. And he does not disappoint. “Renfrew’s Course” covers a lot of ground – it is a time travel story, a love story that has become immured in betrayal and bitterness, and a wizard named Renfrew. Neil and Jim are lovers who are visiting Scotland. They are walking on a pathway filled with twists and turns in a forested land by Renfrew Castle. They experience time travel to various moments of their lives, each designed to lead to a terrible decision between the two of them. It is eerie and sad but nicely done.

Bob Blough has been a reviewer for Tangent Online for over three years. He has been reading SF since 1970 and has always wanted to be a reviewer. Instead he was an actor for 30 years and only lately come into reviewing. And like most reviewers he is a writer (if only desultorily) with more than enough rejection slips to satisfy a new writer.