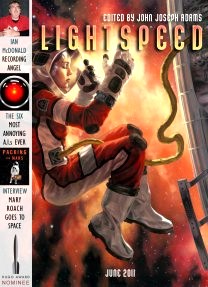 “Snapshots I Brought Back from the Black Hole” by K.C. Ball
“Transcript of Interaction Between Astronaut Mike Scudderman and the OnStar Hands-Free A.I. Crash Advisor” by Grady Hendrix

“Snapshots I Brought Back from the Black Hole” by K.C. Ball is told from the perspective of Mishka, who is “A.I.” Presumably, the author means an A.I., as in an artificial intelligence. This isn’t a story as much as a series of vignettes centered around the crew of a ship positioned near a black hole, studying it. Chloe examines the phenomenon, Sergei captains the ship, Edyta is the engineer, and Andy is both the public face and Chloe’s lover. The various pieces are meant, I assume, to scrutinize the individuals and provide insight into what causes the problem when something goes wrong.

This is an example of what I consider an unpleasant development in short story publishing. The writer tosses out disjointed bits and expects the reader to sustain interest long enough to assemble them. In my opinion, that’s the author’s job. Don’t make it mine.

“Transcript of Interaction Between Astronaut Mike Scudderman and the OnStar Hands-Free A.I. Crash Advisor” by Grady Hendrix is exactly that, an unadorned, tongue-in-cheek conversation between the astronaut and the automated attendant. It’s a one-joke treatise, amusingly done and clever enough not to outstay its welcome.