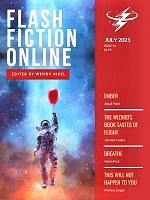 “The Wizard’s Book Tastes of Flight” by Jennifer Hudak

“This Will Not Happen to You” by Marissa Lingen (reprint; not reviewed)

“Listen and You’ll Hear Us Speak” by A.T. Greenblatt (reprint; not reviewed)

In this month’s issue of Flash Fiction Online, editor Wendy Nikel brings us five brief stories focused on a strong desire to escape one’s circumstances, no matter what it takes. Only three of these stories are reviewed here, but in these dark yet inspirational tales, the disadvantaged and downtrodden find a way to break free of that which binds them.

An unnamed protagonist finds themself at a carnival in a frozen land. As they stand at the ticket booth attempting to decipher the local currency required to enter, a man of ice and snow offers his extra ticket. The two walk the carnival together, talking of the narrator’s past, their pain, why they came to this place. The iceman seems so different from anyone else, and the narrator is drawn in by his attentiveness. But is he all that he seems to be?

Patel’s story is a dark tale, to be sure, though hopeful. I found myself wondering as I read whether this was a commentary on racial identity, as the story opens with the narrator’s feelings of being marginalized and mistreated because of their skin color. Even so, it’s easy to identify with the narrator. After all, everyone has been vulnerable at one point or another, and we’ve all known those who would use that vulnerability for their own ends. A great story!

“The Wizard’s Book Tastes of Flight” by Jennifer Hudak

A wizard’s parrot has been nibbling away at his spellbook for years. At first, she did it in retaliation for her captivity and the loss of feathers to the old man’s magic, but now she enjoys the bits of magic she swallows—they tasted like freedom and flight. And, in the end, those tidbits might just end up being what she needs to break her free.

Hudak’s story sets itself apart with its non-human protagonist. The avian heroine is a refreshing break from the usual humanoid heroes one usually finds, and her species makes her no less relatable. I found myself both pitying and cheering for the poor bird.

A perma-street dopefiend is sent to Mercury to work. What he’s sent to work on doesn’t matter. What’s important is the high from the drugs that the overseers shoot them up with. After months on the job, though, something starts to change as bodiless voices whisper in the worker’s ears.

I love the style in which Fout has chosen to write this SF story. It adds a lot to both the tale’s tense atmosphere and the protagonist’s characterization, and the way the text visually appears on the page ramps up these effects. The storyline itself starts rather bleak, as we meet the narrator just coming down off a high after being brutally attacked for his mechanical hands. All in all, it’s a story of the wealthy using the not-so-fortunate as little more than disposable tools and learning that one is capable of far greater things than one ever imagined. Quite a lovely little tale!