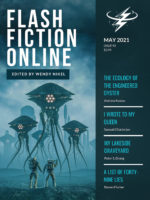 “The Ecology of the Engineered Oyster” by Andrew Kozma

“I Wrote to My Queen” by Saswati Chatterjee

“A List of Forty-Nine Lies” by Steven Fischer (reprint, not reviewed)

Three dark and disturbing new tales appear in the latest issue of this magazine of very short stories.

In “The Ecology of the Engineered Oyster” by Andrew Kozma, those who were responsible for the genetic engineering of marine organisms that now threaten the planet are forced to go on dangerous underwater missions to destroy them. In a few words, the author creates a complex, imaginative future of bioengineering, as well as vividly describing the gruesome fate of the protagonists.

The narrator of “I Wrote to My Queen” by Saswati Chatterjee is a monstrous being combining aspects of human and spider. Letters are fed to spiders in an attempt to communicate with the creature’s unsympathetic human mother. As the story goes on, the narrator becomes more and more inhuman.

This creepy tale is reminiscent of Richard Matheson’s classic chiller “Born of Man and Woman.” The author creates an effectively eerie mood, but the eating of the letters by spiders is a confusing part of the story, the intent of which is not entirely clear.

More terrors await in “My Lakeside Graveyard” by Peter S. Drang. The narrator digs up a coffin from the cemetery he owns in order to dump the body into a nearby lake, thus creating a space for another burial. It’s no surprise that he faces supernatural justice for his crime. Although predictable, this little horror story may please readers fond of Tales From the Crypt (in comic book, movie, or television series form.)