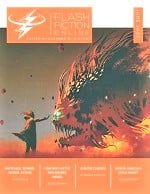 “I am NOT Little Red Riding Hood” by S.L. Saboviec

“Auntie Cheeks” by Renée Jessica Tan (not genre, not reviewed)

This month, Flash Fiction Online has chosen to feature four stories united by the theme of childhood. It’s an interesting choice, this exploration of the many facets of children, particularly in those who don’t fit the usual mold of innocence that we typically envision when we think of kids. The children in these tales are complex, and while I’ll only be reviewing the two that fall under the genres that are the focus of Tangent Online, all four offer something worthwhile in one way or another.

“I am NOT Little Red Riding Hood” by S.L. Saboviec

A new woodcutter has come to town and, although every eligible girl is swooning at his feet, he’s only got eyes for Camilla. She, on the other hand, couldn’t want less to do with him. After weeks of this unwanted attention, he eventually follows her to her grandmother’s house. And we all know what happens next, right? Are you sure?

Saboviec’s story is an interesting take on the fairy tale of “Little Red Riding Hood,” one that I’d say falls into the camp of Feminist theory. I appreciated her exploring the meaning of the “little red riding hood” epithet, considering Red’s hood wasn’t always red. This is a very old story, going back much farther than the Brothers Grimm or the version by Perrault, the latter being the one most people know today. And it’s rife with hidden symbolism, both in the original and the later adulterated versions. In its original form, the hood was gold, a symbol for female sexual maturity and responsibility. It was later changed to red by Perrault, since in the 17th century the color red became associated with sexual lust and sin, thus changing the meaning of the tale altogether. This reasoning for this change in accordance with 17th century morality is made evident when one considers the scene in the original tale where the wolf convinces Red to undress and climb into bed with him.

In this story, Saboviec attempts to correct, or at least challenge, some of those puritanical additions. Camilla’s decision to wear the “risqué” red dress despite condemnation from other villagers returns the narrative to the original intent of the tale, while the Woodcutter’s assumption that he is allowed sexual liberties with Camilla because of the dress’s cut and color is a clear reference to Perrault’s beliefs about female sexuality that prompted his revisions (and, to a lesser extent, those of the Grimm Brothers, as well).

Hidden meanings and theoretical framework aside, the story is well-written and engaging. The ending is also quite humorous. To that end, I definitely recommend this story.

Mindi is dying. Leukemia is eating away at her day by day and all our narrator can do is stand by as her big sister’s condition deteriorates rapidly. She considers her sister’s situation as she watches as Mindi builds a miniature town from match boxes and newspaper cut-outs of people behind the old chicken coop, disappointed that her sister didn’t set it alight, which would then have caught the dried grass on fire and burn down their house. A few days later, Mindi is in the hospital, her sister curled up next to her as the doctors discuss the situation with her parents in the hall.

I have to admit to being genuinely confused on the genre classification that Flash Fiction Online has given this story. It’s tagged as fantasy but I can’t find a single fantasy element in it. The narrator taking a few sentences to imagine what it would be like if Mindi came back as a ghost doesn’t qualify the story as fantasy, just as the mere use of the word “ghost” doesn’t make it fit the genre. That being said, I’m not saying this isn’t a good story, because it genuinely is. It’s just that this is a contemporary tale about sisterly love and the pain of loss (even if the narrator is inexplicably psychotic), not a fantasy story. If you enjoy literary fiction, I recommend you read this because it is a touching tale—just don’t expect it to fit the fantasy genre.