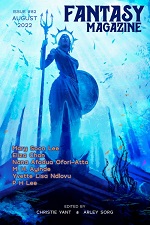 “The Tails That Make You” by Eliza Chan

“A True and Certain Proof of the Messianic Age, With Two Lemmas” by P H Lee

There are four original short stories in this 82nd issue, including one flash fiction.

In this flash fantasy, the author considers the dress code of several fairy tale characters. Each character has a unique fashion consideration. Cinderella has her glass slippers, Snow White her pallid cheeks, and Rapunzel her long hair.

The story seemed to have little purpose beyond mentioning the couture of various characters.

“The Tails That Make You” by Eliza Chan

Her daughter has just grown her first fox tail in this short fantasy. It brings back the mother’s memories of each of her nine tails and the consternation they brought her. When she was young, the tails induced cat calls from the boys in school. When she was older, they caused other unwanted attention.

There was a time when her senior aunt wanted to explain how the world worked and how she should use her tails for power, but her mother stopped it. Now she is unsure how to guide her daughter with the appearance of her first fox tail.

The story was hard to follow in places until its pace picked up toward the end.

Sam decides to grow a girlfriend in this short fantasy. All she had to do was add water to the plant each day, and over a month, the plant grew into the perfect girlfriend.

But Sam wasn’t looking for a companion; she was seeking something entirely different. Making a stew of clippings from the girlfriend, she drinks a little each day, and after several days, her hopes seem to be coming true.

“Girlfriend Material” was a curious story that was easy to read.

“A True and Certain Proof of the Messianic Age, With Two Lemmas” by P H Lee

A fox sees fish panicking in a river in this short fantasy. The fish worry about the fisherman’s nets. But when the fox suggests they join him on the land, they recite a lemma showing they should stay in the river. Unperturbed, the fox responds with its own lemma, showing why the fish should flee the dangerous river. However, another entity suggests an alternative interpretation of the two lemmas.

Told in the form of a parable, the author wrote an entertaining reflection of the modern world.

You can follow Kevin P Hallett’s writing on www.kevinphallett.com. There are links there to join his mailing list for a weekly newsletter on the release of his upcoming novel.