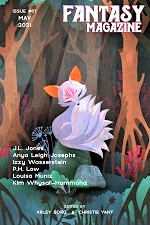 “Like Birdsong, the Memory of Your Touch” by Izzy Wasserstein

“By Our Own Hands” by Anya Leigh Josephs

There are four original short stories in this 67th issue, including one flash fiction. All the stories were entertaining and thought-provoking.

“Like Birdsong, the Memory of Your Touch” by Izzy Wasserstein

In this flash SF, a woman remembers when birds still sang, and plants grew at a more sedate pace. Now the land was hot, and the vines grew fast enough to trap a sleeping person. Is this going to be the end of this round of sentient life on Earth?

The prose held this story together, holding the reader’s attention.

A young boy named Deron is eager to meet the almost mythical person Enver the Bright in this short SF. People who see Enver come back joyful, and Deron wants some of that for his sad mother.

Reaching Enver involves a challenging walk across the desert. And when he gets there, he helps a service robot with buggy code. Enver is impressed with his skills and soon sees a special kind of role for the young boy.

“The Sweetest Source” was a curious story with several moral undertones. Overall a good read.

A girl with a hole in her heart is born to magicians in this very short fantasy. The baby survives, and the physical hole heals in time. But the spiritual hole doesn’t, and when she grows to adulthood, she is quiet and lonely. Only her parents care about her.

She spends time away from home in a coven until they reject her, and she returns home. She decides she needs some new runes to help repair the hole in her heart.

This story was just longer than flash fiction, though the character-centric plot felt longer and more expansive than a flash story.

“By Our Own Hands” by Anya Leigh Josephs

David is a rabbinical student in this short fantasy, and he hopes to see his grandmother again once the pandemic is over. His grandmother warns him over the phone that it is starting again, but David cannot believe it of the country he was born in, despite the anti-Jewish hate he hears and sees on the news.

She guides him to an ancient scroll in the library, written by a distant ancestor. David doesn’t believe in golems, but when he finds the scroll and translates its instructions, he begins to wonder if it can be true. If it is, then he has to decide what he wants a golem to do.

This story was interesting, mysterious, and passed too quickly.