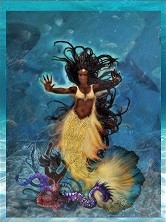 This month, Cosmic Roots & Eldritch Shores has one story in the fantasy category.

Yimika should have drowned in this short fantasy, but she survived, and then Yemoja, the mermaid queen of the sea, resuscitated her. Yimika discovers that she is the daughter of Yemoja’s long-lost sister. And for seven days, Yimika lives in Yemoja’s palace as an honored guest.

Yimika is no one special above the waves, but Yemoja promises Yimika will rule over her mother’s half of the empire side-by-side with her under the sea. However, Yimika has arrived in the middle of palace intrigues that see mermaids plotting to poison her in revenge for some of Yemoja’s past rulings.

Though the prose was good, the plot lacked mystery, and in the end, the story was too predictable.