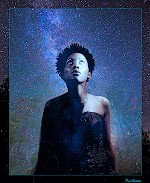 “Bolaji Has a Heart” by Osahon Ize-Iyamu

“In a Field of Bone-Bonnets” by Aimee Picchi

“Bolaji Has a Heart” by Osahon Ize-Iyamu

A horror story where the people are more terrifying than the monsters, “Bolaji Has a Heart” follows the nightmare world of a woman who just wants to manage her farm and live her life in peace.

Recently widowed, Bolaji has refused to remarry in defiance of customs and superstitions, and now the entire village treats Bolaji like a grotesque thing that does not belong among them. Bolaji’s world is a stark, rough place, where her in-laws are an ever-present threat of violence, and storms of black sand are a normal occurrence.

The villagers are afraid of witches and demons and the darkness of night. They tell story after story of terrible things that happen when the village lights are out. Everyone shares the task of putting out the flames of the village lights at night, and they are all afraid of what might happen to whomever has to put out that last light. Bolaji knows that no one would mind if she never came back from her turn. Bolaji is also not afraid when her turn comes to face what really hides in the darkness.

“In a Field of Bone-Bonnets” by Aimee Picchi

This is a sweet little fairy tale about a sentient house with giant chicken legs that has three days to find a new witch before the magic fades and the house loses its awareness forever.

The house travels the countryside, following the strange clues left by its former mistress. In the course of this adventure, the house matures, learning some hard lessons about people. It’s a surprising way to tell a coming of age story, but it works. This is a fun, quick read.