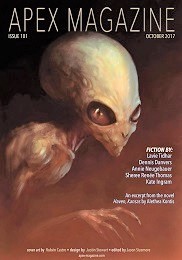 The 101st issue of Apex has four original stories, including two flash fictions.

In this SF short, Cindy sees herself as the ever-patient Penelope waiting for Odysseus to return. In her case, Odysseus is her boyfriend Ralph, who claims aliens abducted him, once again. She doesn’t believe him.

Ralph finally convinces her to go camping at the site of his abductions. Here, when Ralph is gathering firewood, the aliens visit Cindy. They want information and she gives them a book containing some classic stories from antiquity. Weeks later they come back seeking explanations and more information about humanity. They offer her a chance to be ‘abducted’ so she can travel the Universe. What should the young woman do?

Slow at first, this story picked up pace and interest in the second half.

“My Struggle” by Lavie Tidhar

“My Struggle” is an alternative history SF short story. Communists have forced Hitler out of Germany and he now resides in England, a poor, ineffective, private eye. Himmler stops by and offers him large sums if he can find the Spear of Destiny that was used by a Roman Legionnaire to kill Jesus.

Reluctantly, Hitler agrees to help his erstwhile underling. But he soon finds two other parties keen to get the spear for themselves and willing to kill to get it. Following a lead, Hitler thinks he has found the spear. He must now try to get the most for his troubles.

This SF detective plot lacked the mystery to engage the reader. The author seemed to throw the scenes together with little feel for developing a well-constructed story.

“So Sings the Siren” by Annie Neugebauer

A little girl is going to the music hall with her mother in this flash SF. They are there to see a siren’s performance; it is the little girl’s first time.

From another patron, the girl learns that the siren is cruelly controlled by a musician in order to produce the song. Will the girl find the Siren’s performance justifies her harsh treatment?

Though short, this tale engaged the reader from the beginning, quickly revealing the little girl’s mercurial character.

“The Case of the Mysterious Meat” by Kate Ingram

Ingram’s flash fantasy follows private detective Mauve as he solves the case of the ‘Mysterious Meat’. The Salisbury Steakhouse and Petting Zoo is serving something other than Salisbury steaks. After verifying that the steak served to him is Tenderloin instead, Mauve confronts the owner. The answer he receives is not at all what he expects.

A quick tongue-in-cheek story that was the winner of a short writing contest.