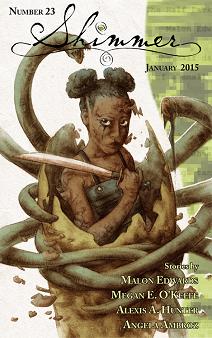 “The Half Dark Promise” by Malon Edwards
“Of Blood and Brine” by Megan E. O’Keefe
“Be Not Unequally Yoked” by Alexis A. Hunter
“Monsters In Space” by Angela Ambroz

The protagonist of Malon Edwards’ “The Half Dark Promise,” Kaëlle, is a not-particularly-popular Haitian girl. When one of her school mates, Bobby, goes missing, she reigns in her fear enough to confront the half dark with Tonton Macoute, the machete her father gave her. Despite the half dark’s many tentacles and sharp teeth, the girl is determined to beat it back and rescue Bobby, whom the half dark has taken. The Haitian Creole interspersed with English here sometimes jars one right out of this story because it is not consistently translated, and its meaning is not always clear from context alone. This is unfortunate because this is otherwise a decent tale about friendship and risk as seen through a youngster’s eyes.

In “Of Blood and Brine,” Megan E. O’Keefe gives us Child, an apprentice perfumer in a place where the sun is harsh enough that people go about in wraps, and their names are their scents. When her mistress is out, Child is visited by a client she calls Scentless because Child cannot smell the client’s name. Scentless wishes two vials of perfume, the second identical to the first, but with the scent of the sea added. For this, Scentless will pay a gold rope, enough for Child to buy her own name and future away from her alcoholic mistress who drinks all the profits. Child finds the scent of the sea difficult to synthesize and takes steps to overcome this obstacle. When Scentless returns, Child is as ready as she can be. This is an interesting treatment of a culture where so much—names, station, and even futures—are tied to scents or the lack thereof. Recommended.

“Be Not Unequally Yoked” by Alexis A. Hunter gives us Joash, an Amish shapeshifter whose wholly boy and wholly horse parts are blurring the lines that have kept them separate and distinct for so long. His family has already been cast out once and relocated to a different community because of Joash’s “sin.” Beyond the synergizing of his shapes, Joash is also confused because of his erotic attraction to Daniel. Determined to find a wife and settle down with his lie, Joash forces himself to pursue Katie. However, because sometimes his shapeshifting changes are now happening outside of his control, Joash shifts in a place where Daniel learns his secret. Though Daniel does not reciprocate Joash’s affection, he insists that Joash’s shapeshifting is the work of the Lord, and that Joash is a gut man. This is a layered coming of age/coming out story.

If you’ve ever wondered what it would be like to be a computer-operated oil rigger on Titan, “Monsters In Space” by Angela Ambroz is just the ticket. Louise, the story’s protag, is on Saturn’s moon for the same reason as a lot of other folks—to earn enough money to pay off some mortgages back on Earth. During her tour, she is detained and questioned after an alleged bomb attack. Geeta, the company representative who interrogates Louise, takes an intimate interest in Louise and the two become girlfriends. Things on the moon are complex with those who would rather terraform Titan and set up farms at odds with British-Virgin Galactic Petroleum who wants the natural resources. This pioneer story, told like the most intriguing anecdote anyone has ever heard, offers a bit of rebellion and subterfuge, all to good effect.