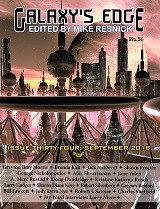 “Employee Theft is an Ongoing Problem” by Brenda Kalt
“The Day Time Stood Still” by Shawn Proctor
“The Horn of Amalthea” by George Nikolopoulos
“Small Fortune and the Perpetual Luck Machine” by Alex Shvartsman
“Yet So Vain is Man” by A. Merc Rustad
“Journey’s End” by Doug Dandridge
“Death, the Devil, and the President’s Ghost” by Larry Hodges
“El Paletero” by Sharon Diane King

An ennead of imaginative tales offers readers a wide variety of fantasy and science fiction, ranging in mood from playful to tragic.

“In Which Liz Builds a Robot with Unexpected Results” by Grayson Bray Morris features a woman who creates a robot to organize her house. Things soon get out of hand. This lighthearted little story may raise a smile.

The protagonist of “Employee Theft is an Ongoing Problem” by Brenda Kalt is a linguist. She cleans and prepares hotel rooms for aliens newly arrived on Earth, in order to learn more about their language. The other employees secretly work for the government. Their assignment is to obtain whatever discarded alien objects they can locate. When the linguist finds a certain item, it leads to a crisis of conscience. This is an imaginative story, with a great deal of verisimilitude and emotional power.

“The Day Time Stood Still” by Shawn Proctor involves a man whose wife has recently died. His desire to avoid losing his young daughter causes time to freeze. This brief fable provides an important message about mourning and letting go.

“The Horn of Amalthea” by George Nikolopoulos is a very short story about the mythical horn-of-plenty found on the goat that suckled Zeus. The outcome of the narrator’s ruthless quest for this valuable object is not surprising.

“Small Fortune and the Perpetual Luck Machine” by Alex Shvartsman is a comic story about a pawnshop for magical items. The narrator gives a gnome a loan in exchange for a device that brings good luck. There is, of course, a catch. This madcap comedy features many references to modern popular culture. Readers who enjoy this kind of incongruity will best appreciate its humor.

In “Yet So Vain is Man” by A. Merc Rustad, researchers discover a biological specimen on Mars. Despite the warnings of a scientist on the red planet, government agents bring it to Earth. The consequences are unpleasant. The final revelation of the nature of the specimen adds a touch of fantasy. The idea that humans would be foolish enough to do such a thing makes it difficult for the reader to suspend disbelief.

“Journey’s End” by Doug Dandridge is set aboard a starship bound for a colony world. The colonists are in suspended animation, while the crewmembers alternate periods of running the ship and joining the passengers in their ageless sleep. Just before reaching the planet, a message arrives stating that invading aliens have destroyed the colony. With limited resources available, the crew must figure out how to reach another world where they can survive. This old-fashioned space opera is an example of the kind of technological problem-solving fiction often found in the pages of Analog. The plight of the crew and colonists never becomes very engaging. This story is part of a series, and may be more enjoyable for those familiar with other works by the author.

The only three characters in “Death, the Devil, and the President’s Ghost” by Larry Hodges appear in the title. The Grim Reaper takes the politician’s body, and Satan takes his soul. (One of the many odd aspects of the afterlife in this story is the fact that a ghost can exist without either.) After some conversation, Death has a surprise for the Devil. This eccentric supernatural comedy features multiple references to a popular song that are less than subtle.

In “El Paletero” by Sharon Diane King, an ice cream vendor has the ability to work miracles. Among the many people who make use of his powers is a man who wishes to live his life over from the very beginning. His desire is not selfish, but rather intended to correct what he feels is an injustice. This is a dream-like, poetic tale, with touches of Ray Bradbury and Latin American magic realism. The story goes in many unexpected directions, with a tone that varies from joyous to sorrowful. The author writes in a vivid style that engages the reader’s senses.

Victoria Silverwolf could not resist the urge to call this group of stories an ennead.