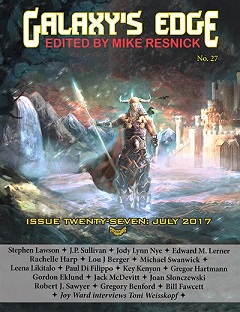 “The Death of Arthur Owsley” by Stephen Lawson

Issue #27 of Galaxy’s Edge contains a substantial amount of non-fiction and a serial installment in addition to its short fiction. That short fiction consists of thirteen stories, four of which are reprints. Of the nine originals only the first and last are what might be called “long short stories.” The middle seven are all flash of between 756 and 1968 words except two in the two thousands. The longer stories tend to be more serious and the shorter intend to be more comic though there are usually serious elements in the humor and weirdness in the drama. Similarly, while there’s a mix of SF and F, they don’t feel particularly different from one another, with the fantasy being more surrealist than wizards and elves and the SF being more fantastic than seriously based in physics and the like. There’s little or nothing particularly bad here but little of substance or that really hit my funny bone.

“The Death of Arthur Owsley” by Stephen Lawson

Lawrence has a “traumatic-death cleaning business” and has cleaned the house of a suicide victim and discovered a secret room with a magic gizmo, the “Aleph,” which is “a point in space from which all space is visible.” Obviously, such a thing could have many uses, some lucrative, but, unfortunately, it makes the user go blind and, apparently, become suicidal. After only a short period of experimentation, Lawrence becomes blind. The story opens with him seeing a doctor and, eventually, a shrink and, finally, spending some time in a sensory deprivation tank, all as means to recover his sight. The backstory tells us how he snuck in to access the Aleph to play the stock market so he could buy the house but then, dissatisfied with the pace, finds a rigged lottery to play in. This unsurprisingly leads to a confrontation with the riggers at said deprivation tank. Events don’t go as any of them expect and Lawrence is faced with a bigger picture.

Lawrence’s lack of sense when playing the criminal lottery strains credulity, his wife’s credulity strains credulity, the brother is almost as convenient as the wife, and the plot is a bit melodramatic (with another problem that’s hard to detail without spoiling the tale) but I haven’t read a lot of stories about traumatic-death cleaners, the Aleph is depicted interestingly, and the story moves along nicely. The theme of (mis)fortune being in “how you look at it” (along with life, the universe, and everything) may be thinly portrayed but the story is a decent read and was one of the two best stories of the issue.

This aims to humorously describe a human professor on a world populated by herbivores who have adopted human-universities but don’t quite understand the professor, movies, or real human life. There was nothing especially wrong with it beyond a familiar theme and not tickling my funny bone.

This aims to humorously describe a human professor on Earth giving a lecture about our existence being a VR with a twist, taking issue with the “anthropic principle.” This had almost the exact theme/funny bone effect as “Tenure Track” except that it’s even more cynical, so slightly more appealing to me.

“Kira, Cyborg Operating System 7.1, Explorer Unit,” has discovered a planet of “Unwireds” and, as an infected cyborg who has experienced the joys of non-cyborg existence as best she can (by powering down all non-essential systems), has returned home and been scheduled for termination by her semi-robot overlords. She tries to escape but fails and then the plot gets convenient and then extremely convenient, all in the name of a rather simplistic theme rather simplistically handled. This tale could be seen as a too-long flash piece but feels more like a too-brief, sketchy standard story.

In this very short short, a woman is interviewing for a job as an assassin. Unless I’m to believe this is not a clandestine interview but a future society in which it’s a perfectly above-board thing to interview for an assassin’s position, there’s no SF or fantasy in this tale at all and I saw the ending coming from the time she said, “I needed this job.” Perhaps I was aided by having recently read a very similar story that still wasn’t great but was much better done (“Welcome to Astuna” by Pip Coen in the June 2017 Apex). That said, this one was told with concise vigor.

Bureaucracy can clip a worker’s wings. (Apologies to Keats.) Fans of second person literary symbolic fantasy may enjoy this short short about an office worker who is missing days (even seasons… even a life) and who has an unrequited affinity for the free-flying birds. However, there are enough typos or solecisms to make it hard to avoid the perception that English is not this Finnish author’s first language and this may present a stumbling block to some of those readers.

Any story with a title which raises such unpleasant connotations that isn’t immediately sunk definitely has something going for it. Dr. Allison Gardenshire is being hunted by three villains for her knowledge of and possession of her “fifth force” “dark photon” “chameleonic pistol“ prototype. A large amount of information is packed into a small space which is exciting despite the “action” being almost entirely the protagonist crouching still and silently. My only real problem with the tale (aside from its goofiness which is as much virtue as fault) is that I have to wonder why her dastardly assistant wasn’t just instructed to steal the gun. Still, this short short, while not quite recommended, is my favorite of the bunch.

“This Knotted Dust” by Gregor Hartmann

A Christian is resurrected in the ostensibly atheist scientific future and has a theological conversation with the technician who resurrected him as he’s led off to the indoctrination center where he’ll be turned into a warrior for the rationals against the regressives on the fringes of the solar system. There is an ironic final scene. Much like “Termination Pending,” this story is too long for even long flash and written basically like a story but is too cursory to work as such.

“Late Night at the Wonder Bar” by Gordon Eklund

Merlin Fassbinder is a movie blogger who’s come to Detroit on assignment for “the first annual Motor City Arab-Albanian Folkloric Film Festival.“ He’s at a bar, feeling dissatisfaction with the festival (and his life), when a woman sweeps in. She claims to be Thea von Harbou (Fritz Lang’s wife and co-writer of Metropolis) and the world eventually morphs in a way that may remind readers of Philip K. Dick’s The Man in the High Castle, though the details are different, with Hitler’s face appearing on American money and so on. They sleep together, part, and the world turns back to normal, more or less. They run into each other a couple more times (Ninotchka, Gone with the Wind), each time with the woman being recognizable despite turning into a main character (which is inconsistent with the first manifestation) in an altered world before the final scene from yet another movie.

This originally felt like it might be a sort of semi-science-fictional “alternate history/time travel” story but it isn’t. It also isn’t fantasy, somehow, but more like surrealism. Fassbinder is fascinatedly bound to the woman but he never expresses awe or shock at the changed world. More like, “Hey, don’t put me on.” The rest of the world never notices anything amiss beyond a Detroit bartender complaining about Harbou’s “funny” money. The character/world-shifting is never explained in any terms. Beyond the genre status, the movies aren’t evoked in an especially compelling way, Fassbinder isn’t an appealing character, and the only thematic thing I can pull from it is a sort of misanthropic element coupled with cinematic escapism which, if it’s expressing a genuine love of cinema, is arguably at odds with the misanthropy. That said, it’s initially interesting and may carry some readers through to the end.

More of Jason McGregor‘s reviews can be found on his Featured Futures blog.