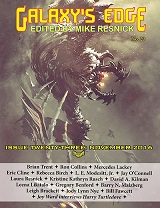 “Ten Things” by Ron Collins
“Sneak Attack” by Eric Cline
“Songs in the Key of Chamomile” by Rebecca Birch
“Upsold” by Jay O’Connell
“Achilles Piquant and the Elsinore Vacillation” by Laura Resnick
“Time and not Space” by David A. Kilman
“The Girls We Lost” by Leena Likitalo

This science fiction short story is set in the future where criminals rob a rich man’s super secure vault. The police round up the ‘usual suspects’ including an ex-space pirate, Jolene Fort, who is brought to the vault for interrogation by the owner.

Jolene calmly works her way through the mystery until she is able to piece together what had transpired. Frustrated, the owner attempts to disprove her convoluted theory which has dire repercussions for him in the end.

I found this rolled along at a pleasant pace and seemed to just flow from the page. Short on action, but long on mystery and new ideas, I found this to be an enjoyable story.

“Ten Things” is a flash science fiction story about a communications expert who’s fallen in love with a vibrant but unfaithful Manda. When he goes away for six months to setup a new communications network between Mars and the mines in the asteroid belt, Manda finds someone else. She takes the engineer for all she can get.

As he stews over plans for revenge, he discovers a doctor had manipulated her genes to make her this way, without her knowledge. The engineer comes to a new practicality over what he should do about Manda.

A quick and interesting read that keeps the reader wondering what the engineer will do. Along the way, the author drops many hints about what kind of future we may be headed towards.

Radford Mueller finds himself in the Grandfather Paradox, in this short science fiction yarn. He travels back to 1941 to meet his grandfather, but ends up killing him in self-defense. As he faces the reality of what will become of his future self, a woman approaches him. She offers to rescue him for an exorbitant fee. She will go back an extra hour, replace his father with an android, so that then he would have just killed the android.

When Radford gets back to his own time, he finds his life unchanged. He is convinced he should make the payment. But then he meets with a con artist who has some revealing information to give to him. The story ends with a nice twist that takes Radford in a different direction.

The story has a nice pace. It delves into some different consequences of time travel, and shows how grifters always find new ways to make a buck at the expense of unsuspecting marks. Overall an okay read.

“Songs in the Key of Chamomile” by Rebecca Birch

A young woman, Jessica, recently lost her love in this flash fantasy. A poster draws her to a little dusty store with the promise of finding a connection to her love, Ricky. Here she finds a kindly old lady who asks Jessica to play her harp and give up the last token she has of Ricky. As she plays, she finds the old lady has imbued the harp with Ricky’s essence and she will never again be entirely alone.

This is a poignant quick story that grabs and pulls you to the end.

O’Connell’s short science fiction tale delves into the experiences of Ammon who lives on a reserve with his family. When the religious elders expel him for challenging their teachings, he finds himself in the modern world with his father and younger sister. Everything is strange beyond his understanding, but his father has previous experience in this world and tries to protect them.

His father gives him money and sends him on a simple mission to find and purchase some food. The modern possibilities and pleasures on offer quickly distract Ammon as his naiveté soon gets him involved in the creation of an artificial ‘pleasure’ girl, with whom he falls in love. The whole experience drains Ammon’s money and his father and sister move on to their final destination without him.

The start of the story seemed choppy and lacked the flow that makes a story easy to read. Great authors have already explored this subject matter, about a backwards and naive boy struggling to adapt to the modern world. I did not feel this story added anything new to this concept.

“Achilles Piquant and the Elsinore Vacillation” by Laura Resnick

Hamlet, the first lieutenant of the starship Elsinore, believes his beloved captain was murdered. This short story chronicles his attempts to find and bring to justice the perpetrator. Believing the senior officer, Claudius, killed the captain in order to assume command, he tries to build his case, enlisting the help of Ophelia (a junior officer) and an investigative android named Achilles.

As they gather evidence that Claudius could be the guilty person, Hamlet is indecisive in pushing the situation to a head. Finally, there is a confrontation when Claudius arrests him. In that final scene, Achilles reveals who the true villain is and what their motive was.

This story lacked pace and believability for this reader. Nor was it appealing as a tongue-in-cheek parody of Shakespeare’s tragic play. It staggered through an old plot of murder for personal gain.

“Time and not Space” by David A. Kilman

This is a flash science fiction yarn. Carl has invented a time machine. He enlists the services of his long-suffering housekeeper to witness his first live experiment, wherein he will travel five seconds into the future, appearing to disappear for that length of time. But when he activates the machine, it does move five seconds forward in time, but not in space.

Kilman’s story is light and easy to read. However, the setup and introduction reminded me a lot of H. G. Wells’ original story. The one twist about not moving in space was interesting but not redeeming.

“The Girls We Lost” by Leena Likitalo

Likitalo’s flash SF story tells us about Leann, who finds a way to time travel the mind of a person. The body stays behind and continues to function, governed by a small percent of the remaining mind, until the body catches back up to the mind.

Leann’s friend wants to get past her grieving for close friends killed in a traffic accident and Leann offers the choice of moving forward a week or more. Though the technology works, the temporal displacement produces impacts on the body and soul that make it clear that normal grieving is far better than trying to skip over it.

The author raises some interesting concepts, and though it did get confusing at points, it ended up a nice read.