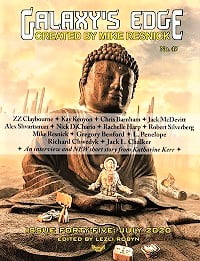 “The Dictator and the Butterfly” by Kay Kenyon (Reprint, not reviewed)

“Down Memory Lane” by Mike Resnick (Reprint, not reviewed)

“Choice of the Conquered” by Alex Shvartsman

“Black to Move” by Jack McDevitt (Reprint, not reviewed)

“House of Bones” by Robert Silverberg (Reprint, not reviewed)

“The Right Reward” by Katherine Kerr

This 45th issue of Galaxy’s Edge contains six original stories, including one novelette. In addition, this issue contains four interesting stories that were previously published.

Nick has plenty of time on his hands in this short SF; especially after his girlfriend, Kuldeep dumps him. Time enough to investigate an old SETI transmission from fifteen years ago.

Like others before him, Nick can’t decipher the language, but he does discover that it’s related to the moon and the sudden seismic activity he detects there. With the world focused on the recent launch of the Mars expedition, Nick goes to Kuldeep with his analysis. Can he convince her that he’s telling her the truth and not just trying to rekindle their relationship?

This was an unadorned story that left a lot of possibilities unexplored. In the end it felt too straight-forward.

In this short SF, a mother only survives a horrific crash when the doctor replaces much of her body with artificial elements. As she struggles back to reality, she has just one overriding concern; will her nine-year-old daughter even recognize her?

This was a snippet of a story that relied on the story’s one punchline.

“Choice of the Conquered” by Alex Shvartsman

Richard is an OPS prisoner in this unusual SF novelette. The Office of Planetary Security runs the world as the human overlords for the aliens who conquered Earth a decade ago. The OPS are cruel and much despised.

After losing his girlfriend and younger brother to the OPS goons, Rick is ready to fight and overthrow the overlords. But how can he even think about doing something when the OPS have a policy of killing the friends and family of anyone who resists. Then he meets a member of the legendary Six.

This was a character-based story with a different take on alien domination. It was well structured and kept the reader engaged until the end.

Nick DiChario’s SF fable begins with an easy-going bear stopping at the village café for a quiet snack. A hunter, who is following her, raises his musket. Despite the bear’s entreaties and the locals pleading on the bear’s behalf, the hunter still prepares to fire. Then the preacher intervenes; after all the bear is a regular at his church’s Friday night bingo.

Like all fables, this one has something to say about human morals, tied into a short and entertaining story.

Cynthia is escaping from a bad date when microscopic Bimaiy inundate her in this SF short. As the Bimaiy infuse her skin, they struggle to understand Cynthia and the art of her life.

These trans-dimensional beings have plenty of time to learn humanity since they make Cynthia immortal. Of course, this makes Cynthia a celebrity, though she can’t understand why she is this way. But what will the Bimaiy do when they finally reach the pinnacle of this new art form?

The prose was slow at times, but the story’s concepts were interesting even if only partially explored.

“The Right Reward” by Katherine Kerr

In this short SF, Mrs. Walker’s children don’t have time to visit her anymore. She has fallen out of step with the modern world, and she ignores her son’s pleas to buy something just to ‘please herself’. And then she sees something hideous on a shopping channel and voices in her head asking her to buy it.

This was a pleasant tidbit of a tale. Over before it had hardly begun but leaving a pleasant aftertaste behind.