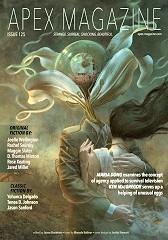 “Next to Cleanliness” by Rose Keating

“Gift for the Cutter Man” by D. Thomas Minton

“Wake Up, I Miss You” by Rachel Swirsky

Issue #125 of Apex includes six original stories. It was an entertaining collection of stories well worth the effort to pick up and read.

The setting for this horror short is the home of a preacher who warns his grandson, Grant, to stay out of the attic. But when the attic ladder comes down by itself, Grant forgets the commandment and climbs up. There he finds a black witch chained to a bed.

She says her name is Inanna, and she bewitches him through his lust for her. Grant does whatever she asks. At first, he only must deny he has visited her, but later she demands more and more until finally he must find her death and bring it to her.

The author has crafted a story with good prose. But the plot was predictable.

“Next to Cleanliness” by Rose Keating

Catherine needs a cleansing in this short fantasy. Her friend sends her to a famous doctor who gives her a crusty bottle of liquid to drink each day. The effect is quick, sloughing off her flesh until she is a walking skeleton. At the end of the week, the doctor gives her magical beef, restoring her flesh.

Catherine is still toxic. So, the doctor changes her sex life from one extreme to another over two weeks. But it makes no difference. And the doctor decides to employ more radical approaches.

The author’s prose was light and engaging, and the plot left the reader to decide the story’s purpose.

Lura is the pilot of an FTL spaceship in this short SF story. They use FTL to ‘breach’ a limited distance in space. But each breach could result in a discontinuity or a leap to a new reality that leaves one thinking the world has changed behind your back.

For some reason, Lura is primarily immune from this effect. But with all the other pilots breaching, the sum of the discontinuities threatens the entire existence of humanity. The one hope is an extended mission that Lura volunteers to go on.

“Discontinuity” poses an unusual concept around Faster Than Lightspeed travel but then explores the consequences in a rather simplistic manner.

Tara’s life has taken a few bad turns in this short fantasy. And on the day she meets her ultra-successful ex-schoolmate, Tara wakes to find she has the Midas touch, except everything she touches turns to candy rather than gold.

Putting on a brave face—now made of taffy—Tara drives in her candy-car to the restaurant. A quick adjustment of her candyfloss hair, and she is ready to meet her friend.

The author has created a whimsical tale around a strange happening that ultimately goes nowhere.

“Gift for the Cutter Man” by D. Thomas Minton

In this macabre SF short, Legrue is a cutter, scratching out his survival in the Under. Other desperate members of the Under come to him, giving up a finger or more for some money. Legrue has a two-year-old daughter suffering from the Fever and needs the pittance he earns for her medicine.

Despite it all, Legrue struggles to remain a man of integrity. When the loan shark comes for repayment, Legrue feels obligated to agree to his terms. He must decide between saving his daughter and committing an act beyond the pale.

The author explored the depths of humanity in a hard-to-put-down story.

“Wake Up, I Miss You” by Rachel Swirsky

Poppy’s twin sister is lost in her own world in this short horror story. Meanwhile, Poppy faces her own problems with the elephant nurse, doors that open onto different dimensions, and birds telling her to wake her sister.

The people she meets warn her that the Queen of Teeth is coming to kill them both. It is all very distressing for Poppy as she has lost all control over what is happening around her.

The author has written a short and disturbing story about mental illness and told it from a unique perspective.