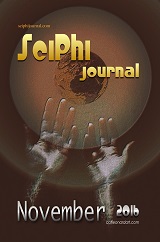 Science fiction, to me, is a “literature of ideas” and I’m more tolerant than many of fictional foibles and failures when the ideas are good. Ideas and great fiction aren’t remotely exclusive, though. Most great SF stories have a philosophical component, be it “Microcosmic God” or “The Star” or any number of others. But Sci Phi Journal is an avowedly didactic zine (the guidelines say the “philosophical part” is more important than the scientific (or, apparently, fictional part), which again proves that didacticism doesn’t generally produce great fiction. To be fair, it turns out that payment is “a share of royalties” which may be “between 1c and 2c at this time,” so these are basically labors of love. (But, then again, what short fiction isn’t?) This issue presents us with seven tales between one and four thousand words: one surreal tale, three consecutive tales which portray science/technology and scientists/technologists in bad lights, one advertising/media manipulation tale, and two satires on religion, the first of which has the wisdom to be funny and is the best tale of the lot.

Brian is a sort of a guy in a sort of a world who wanders from one strange memory or thought or scene to another. Some of these are connected to George, who may be an old man next door. They talk about dreams and George is about to say something important when Brian must leave due to an emergency. During this time, George dies, but has left Brian a note which may pertain to his existential situation.

This story contains a large number of sentence fragments which are presumably a stylistic choice but which help contribute to a lackadaisical feel. Other things that contribute are vague characters having memories, thoughts, and scenes that often seem like non sequiturs. The author says he thinks of this as his Philip K. Dick story (its basis is actually close to a couple of Clifford D. Simak stories) but PKD generally creates a base reality before he sets about destroying, subverting, or transmogrifying it and, while his characters are somewhat limited from story to story, they are at least tangible within each story. More importantly, there is usually a sense of an interlocking plot moving things along. Most importantly, perhaps, he tackles issues in a way that make them seem more significant than this story which has lines like, “Imagine a world where I grabbed a beer instead, Brian thought as he pulled a can of Coke from his neighbour’s refrigerator.” There are some effective images and a quirky nuance or two and this might appeal to someone but just didn’t strike me as professional-grade work.

These two pages tell the tale of a pair of scientists going to alternate past Earths and kidnapping children for unethical experiments to decide the debate between nature and nurture and of the results of those experiments.

The results are very underwhelming, as is the rest of the story. I’m not sure if it’s trying to be serious or funny, but it’s not funny and is too slight and awkward to take seriously.

In an odd editorial choice, this story is exactly like the previous one in a core aspect: a guy performs an unethical experiment to solve a dilemma. This time, he has cloned half a dozen Valeries and raised them in separate but equal environments to decide if people have free will (with a dollop of nature vs. nurture again). He displays his results to a gaggle of friends or associates (including the narrator) who react in various ways.

This isn’t especially convincing as fiction but shows more apparent effort (though, whether typo or misspelling, “Descarte” needs a terminal “s”) and produces more interest than the previous tale.

We’re on board a spaceship while a “cartographer” is being fed and otherwise simultaneously getting maintenance and being abused. Cartographers are basically idiot children tested to destruction to supply us with the ability to quickly navigate space and supply ourselves with resources. The narrator aboard ship expounds upon this social structure (complete with guilt-assuaging religion) for the entirety of the story’s five pages, excepting only flash descriptions of the cartographer’s pain.

While this is reminiscent of many stories in which space travel requires some gimmick, clearly its point is nearest to Le Guin’s “The Ones Who Walk Away from Omelas.” It has no plot, it has no characterization, it has no actual science (link to wikipedia article on Minkowski Space notwithstanding), and has absolutely no subtlety as it inflicts pages of minute sadomasochistic descriptions of fluids and sores and restraints and suffocations (misusing the term “bradycardic”) and such on the reader, because otherwise we might miss the point that abusing defenseless innocents for one’s own gain is, y’know, bad.

“In Ages of Imagination, Thus Are Removed Mountains” by Robert J. Santa

People living in the asteroid belt have revolted and the UN wants to wage war against them. The problem is that it will require a massive influx of personnel which they lack the time and resources to provide for themselves, so they hire an advertising agency for the recruitment campaign. The two execs in charge produce what they feel sure is a winning campaign but its specific nature and its ultimate results are the main point.

At least, that’s how it seems to me. The little “Food for Thought” blurb after the story (all the stories have these) indicates that the main issue should be how society handles media manipulation. But that isn’t what especially strikes me about the story. That’s the sort of thing Pohl and Kornbluth did to perfection decades ago and this does indeed seem to be decades old in its assumption that only men could serve in the military and that men’s attitudes towards war have nothing to do with women’s attitudes. Even Lysistrata and medieval tales of winning the lady’s favor were aware that this was, indeed, a factor. The more interesting point of the story would seem to focus on whether sacrificing aspects of one’s society to achieve a supposedly needed result would be worth it. Besides which, there’s an efficiency issue here: if these ad execs are so brilliant, why can’t they come up with a campaign that can placate one group while exciting another? That said, while this story shows the strain of didactic intent, it does at least try to create a couple of actors and put them into a minimal plot, so meets the minimal requirements of fiction and, even if apparently accidentally, provoked some thoughts.

Martin Twang is writing a very bad story and we are given an excerpt from it, followed by some unkind (to say the least) reviews. Pterodactyl Sparks (the phrase is actually a proper noun) is a sort of cannibal fetus in the story excerpt but, when Mart gives up on a normal writing career and takes the L. Ron Hubbard route (though Elron isn’t mentioned and Pterodactyl Sparks is stylistically more reminiscent of an ignobly-inspired Flying Spaghetti Monster), it is recast as the human incarnation of a dinosaur which imagined the universe into reality and who now needs humans to imagine him into reality. Mart founds a religion based on this story and we’re told of its progress in a few short pages composed of a variety of blog excerpts, diary (journal!) entries, radio snippets, etc.

At one point in our story, an agent says of Twang’s story, “It’s not good by any means, but it’s going to make us both rich.” I almost felt like saying of our story, “It’s not good by any means, but it made me laugh.” This story is filled with what I hope are typos such as a person having the rank of “Colonial” and getting a “thunderous round of applauds” but they sort of fit the spirit of the tale. In a way, this story is a good one, though, in that it has the wisdom to make its didactic point about the nature of religious belief (and the cycle of persecution) with humor rather than with ponderous non-fictional dullness. I can’t quite recommend this story, but it’s the one story in this issue I enjoyed reading on at least some level.

This is one of the many universe-in-a-bottle stories in which a guy (Yao) creates a world and is its god. In this one, he names one of his creations Abraham (guess which world he created) and Yao’s wife actually plays a major part in the famous test.

The multiple deity thing certainly gives God an excuse for any inconsistency but, otherwise, I just really don’t know what to say about this. I guess it’s novel to make God a geek with a “hot” wife.

Jason McGregor‘s space on the internet (with more reviews) can be found here.