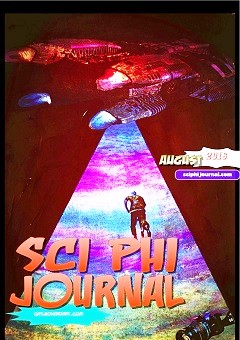 “The Yellow Flag” by Lou Antonelli

“Burning Men” by Samuel Marzioli
“Ada” by Peter J. Borger
“Uni-Mail” by Ellen Denton
“Wrong Cat” by Christian Roberts
“Bag” by Terry Martin
“In the Land of the Blind … A Parable” by Anthony Marchetta

The 16th issue of this ezine has seven original stories. Three are flash fictions and the rest short stories. Two of the stories were nice reads.

“The Yellow Flag” by Lou Antonelli

This short science fiction story is about Chris and Pete, paranormal reporters hoping to gather evidence of ghost activity in an area of the plains called the Haunted Prairie. That night they detect activity just before something renders them unconscious. Chris awakens to discover a human alien has abducted them. The alien entrusts only Chris with the secret of why the galaxy has quarantined the Earth.

This story and character development is predictable and the over-all premise presented nothing that was new. Not a compelling read.

“Burning Men” is a science fiction tale about George, who is newly hired to burn to death any unemployed people he finds. Judge, jury, and executioner, George is haunted by his moral concerns, despite his partner’s reassurances that they are doing the right thing. In the end, George feels that maybe it’s okay after all.

This is another dystopic vision of the future in which man perpetuates great evil in the name of good. But in this future view, the math doesn’t add up, it is an unsustainable future. The characters were more like caricatures of the amoral evil man and the haunted evil man. It was not an engaging read, nor one that presented any new insights for this genre.

Borger’s short science fiction story is about Nate, an ambitious technician who’s pushing hard to develop the skills to be a prospector in the ‘belt’. He meets Ada, an equally qualified young woman who only wants to expand her humanity. Nate falls for Ada and begins to better himself, helping others to impress her. As they fall in love, an accident reveals that Ada is an artificial being, but Nate’s new persona accepts this and decides to help her free herself from the servitude that comes to all machines.

The writing was okay, but not very entertaining as the story plot had a hackneyed feel to it. Many other stories in a variety of genres have raised these same ideas.

Earth has redirected Star-Rover IV to a far-flung planet that is sending out a distress signal in this piece of flash science fiction. The ship’s crew discover long abandoned transmitters sending the message, but nothing else at first. After extensive searching, they discover the tip of a buried cone, and a last chilling message at the bottom of it.

A not so new a take on the old story of civilization destroying itself, this story was predictable from the start. The slightest twist in the tail did nothing to create any suspense in this story.

This is a flash science fiction story very light on the science. Passing aliens transform a group of cats into creatures of intelligence. The cats begin a discussion of right and wrong with all but one of them in agreement. The resulting conflict follows many parallels to human debates about similarly polarizing matters.

A quick parable using animals to show human foibles, like Animal Farm did sixty years ago. Nice and lightly written, I enjoyed this quick parable.

Callum is on the run with his bag from another dimension in this short science fiction tale. The bag has kept him alive so far, but the bad guys are closing in. Their boss wants that bag too and killing Callum is just what’s necessary to get it done. Does the bag care who possesses it? As it reveals feelings for Callum, it also reveals greater abilities to protect him. He just needs to place all his trust in the bag.

A fast-paced action yarn with a few interesting twists. The longest story in this collection, it passes quickly as an entertaining read.

“In the Land of the Blind … A Parable” by Anthony Marchetta

This flash fiction tells us about Grogan, an ambitious man crippled by fire who wants to be king. In a land of the blind, he claims to have one good eye and can see a monster threatening the country. Elected king, to protect the people, he exploits his power until visiting merchants catch him out.

A story that had over-tones of the parable of the emperor’s new clothes, this effort had all the lack of story craft often seen in a parable. Any reader can anticipate the ending twist from early on in the story.