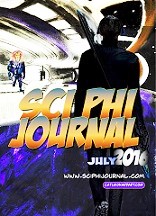 “On Board Leper” by E.J. Shumak

The 15th issue of this ezine has nine original stories. Two are flash fictions and the rest short stories.

“On Board Leper” by E.J. Shumak

This short science fiction story is about Duerr, the scan comms officer, third grade, on a spacecraft charged with pushing the alien Concolorons out of the Vega system they occupy. After a surprise attack by the Concolorons, the human captain promotes Duerr to first grade and they prepare to fight back and sweep the aliens out of the system.

The Concolorons will fight to keep all other species out of the Vega system. They mean to protect the Karnth crystals that are important to their religious beliefs. But the humans don’t care – greed is their motivation. In the end, Duerr is not what he appeared to be.

This story feels like a shoot’em up space yarn. It also feels like the first draft of a story that needs two or more versions to become palatable. The story has many cliché elements, the under-estimated ability of the aliens, the greed and arrogance of the humans, and an abrupt end that doesn’t meld with the rest of the story.

“Robot Mothers” is a science fiction tale about a robot created by blending two robots together. In itself, not a big deal, but since the donor robots did it themselves, robots created the new composite robot. A human panel is interviewing the new robot to understand why. When they discover the reason is for self-preservation and is not in violation of the three laws they are uncertain how to continue.

I did not feel this story broke much in the way of new ground and though it was short, it seemed too long for the depth of the material presented. The ending, which was more like a football punt, left much to be desired.

“The Decision” by Sean Patrick Hazlett

Hazlett’s short science fiction story is about a young woman who quickly rises to prominence in the colony on Mars. Shipped off to Mars by the authorities to silence her potential anti-establishment tendencies, the plan backfires in an Earth-shattering conclusion.

The young woman demonstrates a cruel streak that would have shocked Machiavelli. She first recruits allies and then sadistically destroys most of them to help further her goals. A rather brutal view of one despotic person’s climb to power and how they use it.

The writing was okay, but not very engaging as the events in the story took on a catalog feel, one event followed by another with not much flow between them.

The author explores the temporal grandfather paradox in this piece of flash science fiction. The protagonist uses time travel to move to the future, steal a million, and bring it back. His success spawns a host of copycats and the future police find a way to break through the temporal limits to stop him. But if he’s stopped, will the incentive to break through the limits still exist?

Hall’s story is easy to read, a pleasant ten-minute diversion during the day.

“A Right to the Cerebellum” by Richard Zwicker

Hardwick is a cop who has been hardened and corrupted by his long service in this short SF story. When his partner, Weatherby, goes missing, he agrees to take on Nick Stokes, the chief suspect in his partner’s disappearance. Hardwick will challenge Stokes to a thought boxing match, played by asking personal questions of the opponent, trying to gain points from lies or evasion.

The plan is for Hardwick to trick Stokes into revealing the fate of Weatherby. But Stokes turns the tables on Hardwick, getting him to reveal much more than he ever should about himself.

This short story moved quickly and was over too soon. It raised some thought provoking ideas about how hard it can be to remain morally strong when you have to deal with the cesspool of life. I enjoyed the tale.

“The Art of Debate” by Gunner De Winter

This short science fiction story describes five diverse alien life forms that have evolved to a point where they use the art of the debate to eliminate the need for physical conflicts. Each sentient civilization has its own unique approach, but all have the common theme of compromise to find a solution that is superior to any individual idea or desire.

De Winter seems to be preaching from his own soapbox in this story. Though I agree totally with his premise, I didn’t find this format engaging. This theme of peace and prosperity through compromise isn’t a new idea.

“The Sixth Finger” by Paul Williams

The idea in this science fiction short story is that humanity continues to evolve for the better. What is viewed as a deformity could be an evolutionary improvement.

Briyen is a young boy born with a working sixth finger in a remote village in Tibet. A rich man, Henti, rescues the six year-old. Henti’s life mission is to find, raise, and educate children with such a deformity. Briyen meets a girl with the same sixth finger and Henti contracts them to marry each other and have children.

In time, Briyen and his wife acquire a good education and after Henti has passed on, they help to instill in the population an acceptance, even a desire to have and to nurture children with the sixth finger.

Though an interesting concept, I didn’t feel the science fiction here was plausible. The story felt slow and lacked the character and plot development needed to make it an engaging read.

“Job Transfer” is a flash science fiction story about Emily, a sentient computer responsible for running a space station. When an asteroid strikes that station with little warning, Emily manages to minimize the impact and save many lives, at the cost of her own life. In death she is offered a chance to choose what life she would like to come back as and chooses to be a writer.

The story telling is easy to read and the plot is okay, but doesn’t break much new ground. Overall, it just falls short of being a good read.

“Zen and the Art of Spacecraft Repair” by Hunter Liguore

Liguore’s short science fiction story follows Mitchell, a father struggling to see his son on his twelfth birthday. With visitation rights limited to every other birthday, he’s imagined how he’ll enjoy time with his estranged son.

Mitchell loves to tinker with his spacecraft and owns an outdated model that requires more hands-on maintenance. Fighting through several mechanical issues, he arrives two days late. Taking his son on an impromptu flight in his rickety spacecraft, Mitchell is at first thrilled at his son’s interest in old broken-down space cruisers they see. But when his own spacecraft breaks down his son quickly loses interest in the realities of space travel, dashing Mitchell’s hopes as he returns his son to his ex-wife.

Anyone familiar with the famous book on Zen and motorbike repair will recognize many parallels in this story. The author has updated the classic philosophical story with space travel. However, the science fiction upgrades are crudely inserted. The slow pace and unimaginative science fiction did not make for an interesting read.